Knights Templar also known as the Poor Knights of Christ was a military monastic order dedicated to the crusades. Formed by nine knights in 1118 to protect pilgrims in the holy land. The order was named after its headquarters known as Solomon’s Temple in Jerusalem. The headquarters was moved to Acre after Jerusalem fell to Saladin in 1187. 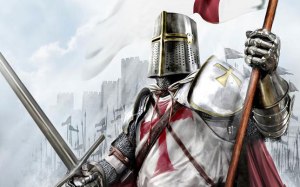 The Templars began to amass riches in the crusader states in East and West Europe. Although the Knights Templar were involved in many disputes primarily with their rivals the Hospitallers that lead to endangering the defences of the Holy Land their bravery was unquestioned.  The siege of Damietta part of the fifth crusade in 1219 won them much admiration where they were heavily outnumbered yet the crusaders managed to take control of the city.

In 1307 the Templars were tortured by Philip IV of France for heresy and five years later the order was dissolved and the Templars wealth split amongst the Hospitallers. The last grand master, Jaque de Molay was burned to death in 1314.

Recommended reading if you would like to know more about the Knights Templar.

Secrets of the Knights Templar: The Hidden History of the World’s Most Powerful Order