Another excellent novel from Stephen King and is added to my list of great book you must read. The story starts with the slaughter of eight people in a crowd waiting for a job fair to open. They are mowed down by a madman in a 12 cylinder Mercedes driving into the crowd who relishes the feeling of the bodies being crushed to death under the Mercedes he is in control of. 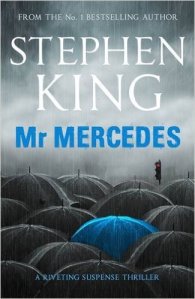 The detective in charge of the case is Bill Hodges retires from the force never solving the crime. Hodges receives a letter from the man who claims to be the killer and the book rolls on from there. The characters of Hodges, an old school style detective and Mr Mercedes the psychopathic murderer who uses psychology to try and bring Hodges to a state of suicide.

King’s writing takes you into the minds of the characters in this totally absorbing and gripping thriller.